The middle of a Coronavirus shutdown is probably not the right time to look at reworking the whole U.S. equity market structure. But deadlines are (still, currently) deadlines.

Within the next four weeks, we’re all meant to submit comments on these plans as well as doing our day jobs, from home. Today, I plan to focus on the SEC’s proposal and spell out how its plan would truly impact markets.

There is a lot more here than people might realize. This doesn’t streamline what we have or remove complexities or inefficiencies. But these rules touch almost all facets of Reg NMS and beyond, and our core understanding of a single protected and actionable NBBO (National Best Bid and Offer). Something that is, ironically, the envy of the fragmented world.

Instead, the proposed rules are designed to create additional new infrastructure, which will likely have unintended as well as intended consequences. In that sense its looks a lot like a U.S. version of MiFID-II.

Where have we come from?

Before we contemplate the problems to solve, let’s first think about how we got here.

In the “old days,” exchanges listed stocks and investors went to the individual exchanges to trade them.

Then, back in 1994 with the introduction of Unlisted Trading Privileges (UTP), the U.S. Congress mandated that new competitors could set up to trade any stock without the myriad setup costs incurred by those venues that also invest in capital formation and bringing companies to investors. Not surprisingly, competition flourished. There are now dozens of venues that can trade any ticker.

Over time, it became clear that this also created fragmentation and that added to complexity. There was a lack of transparency into who had the best prices when, which made it difficult to ensure investors were not worse off.

The simplifying principles behind NMS

Then along came Reg NMS. Short for “National Market System,” NMS in principle stitched the complex and fragmented market back together.

Concepts like the NBBO and the SIP (Securities Information Processor) were put into their current forms, creating a single “golden source” of best prices for investors—a “virtual single market” in the newly dispersed world.

Routing and execution quality standards were then created to leverage this new NBBO.

Although exchanges also had to provide their pricing data to the SIPs for free, economics were put in place to try to reward them for their data’s contribution to market quality of the combined network.

Chart 1: NMS creates a single NBBO out of a network of competitors 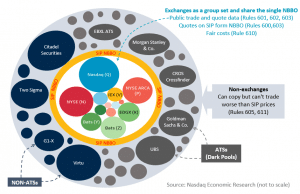 We talked in Reg NMS for Dummies about what each of the NMS rules do. There are 14 rules that can be grouped into six general categories (Table 1).

Table 1: A summary of NMS rules

Definitions: defines concepts and terms, which is sometimes pivotal to how the later rules work.

Fairness in INFORMATION: are about reporting trades and quotes to the Securities Information Processors (SIPs), ensuring access to data by exchanges.

SRO rules: Set rules for what Self Regulating Organizations (SROs) need to do to publicly change rules, including SIP operations.

CAT: is relatively new rule, covering the consolidated audit trail (CAT) which is designed to consolidate and replace other reporting rules that FINRA currently manages like OATS and Blue Sheets and help the SEC investigate and police participant behaviors.

It’s clear that U.S. markets aren’t “broken.” Data shows they are the most liquid, largest and cheapest to trade in the world. And their performance during the recent Coronavirus selloff confirms they have remained liquid and transparent.

That’s in stark contrast to parts of the bond markets which have virtually stopped providing liquidity and pricing, requiring unprecedented intervention from the Fed to remain functional for investors. 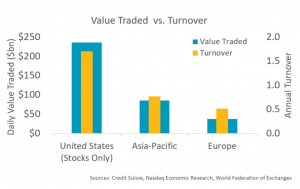 But there are some things that many people would like to change:

Despite all these facts, there is pressure to “do something.” So back in January, the SEC proposed consolidating the three tapes into a single SIP. This simplification and streamlining of markets would modify Rule 608 and Rule 609 that determine how SIPs work. This rule also changed SIP governance, giving consumers and competitors votes on potential new data revenue decisions (Rule 601), arguably increasing conflicts of interest, but we digress.

Then just one month later, a Valentine’s Day proposal suggested the opposite (multiple SIPs) and much more. The rule proposed changes to Rule 600 and Rule 603 as well as adding a new Rule 614, but these changes will likely have unintended consequences on other rules too.

Rules that affect retail trading, from the ability to price improve (Rule 612) to disclosures of routing and broker incentives (Rule 606 and Rule 607), are the only NMS rules that aren’t changed. Despite that, retail seem to be net losers from the changes to PBBO (Protected Best Bid and Offer), which will make it harder to police whether orders got the best fills available.

What market structure do we want?

The overwhelming desire of most investors is to make markets fairer, more equal or simpler.

Although these rule changes touch almost all of NMS, they seem to mostly help sophisticated traders and others with the time and expertise to navigate more complex and fragmented markets.

We all want to improve markets and believe there are ways to do so. But comments are due soon on these sweeping SEC proposals. So it’s important we put our heads together and look at the data to make sure we don’t do more harm than good.

Speaking of data, there is lots to do to understand the potential costs, benefits and unintended consequences of these changes. This discussion should just be a place to start.