Consider this: back in May 2008 astronomers spotted a supernova or exploding star. However, it turned out this star was 88 million light years from Earth. That means the explosion happened 88 million years ago, well before humans roamed Earth, even though from our perspective it “looked” like it just happened.

The same thing happens with trading, although on a much smaller scale.

Think of it as Einstein’s Theory of Special Relativity applied to trading, because what the market actually looks like depends on your position in space. That also makes speeding up the SIP, and protecting speed-bumped quotes, especially difficult.

What is geographic latency?

Let’s start with the geography.

Recall from our earlier post that trading of all tickers can happen at any market place. In fact there are three major locations that stocks trade (Chart 1):

Although the speed of light is fast, it’s not instantaneous (as the supernova example above proves). The time it takes to send messages from one venue to another creates unavoidable “geographic latency.” 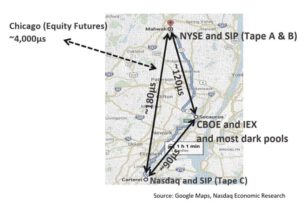 Chart 1: Message transit time between venues at the speed of light

Note that for simplicity, this post assumes there is no latency caused by network equipment (e.g. switches, radios, etc.) or cabling within the data centers. Ironically, that assumption makes it seem that all participants are operating at the exact same speeds. In reality, participants will never be at the exact same speeds. Regardless of how data is transmitted, different hardware and software choices will affect trading speeds.

Even at the speed of light, it takes at least

This is actually fast. The time it takes futures quotes and trades to travel from Chicago back to New Jersey is closer to 4 milliseconds (4,000 µs).

That’s similar to the distances around Europe, which is also considering a consolidated tape. That additional latency makes it even harder to build a European Best Bid and Offer (EBBO) that is actually useful to professional investors, as will become obvious later.

The second wrinkle in time comes from the fact that glass has a higher refractive index than air.

That makes transmissions that travel through air faster. Microwave and laser travel at almost the speed of light. But there is a cost. They suffer from low bandwidth and data loss in bad weather.

In contrast, optic fiber is far more reliable and also has much more bandwidth. Whenever reliability and capacity is important, like for NBBO quotes and trades, data tends to travel around the market on optic fiber cables.

Interestingly, you can transmit more data per second on fiber, so if you have a lot of data to send, fiber will finish sending the data faster. But each byte moves around 50% slower, so if you have just one order to send, microwave will get to the destination first.

You can see from the times below, it takes quotes around 50% longer to travel in fiber:

Let’s consider how this works in real markets tracking a real order around the market. And if you need a refresher on the difference in microseconds (µs) and milliseconds (ms), see Time is Relative.

Say you are a buyer in AAPL and you want to lift all shares on the offer.

Here is what happens: 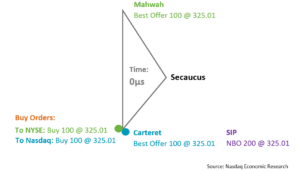 Chart 2: The market for AAPL at Time = Zero

Because the broker is based at Carteret, all trade messages are sent from there at the same time (circles).

There is almost no distance to the Nasdaq market, so almost no geographic latency to lift the Nasdaq quote. That also makes it is fast to put that trade and quote update onto the SIP.

However it will take at least 180µs for the buy order to get to NYSE.

Consequently, after 100 µs the: 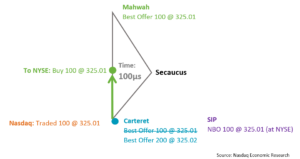 Fast forward to time = 200 µs. By now, a microwave route to NYSE should have arrived and traded. This is where spatial relatively comes in, as now:

Spatial relativity in the market

This is important. From above, after 200µs there are no sellers @ $325.01. The market has changed already. But not everyone will know yet (even with microwave price feeds).

However, even those who do know, can’t do a lot about it, as a trade message has to travel the same route as the fill messages. Both take time.

That’s also why latency arbitrage happens less than people think. Often the quotes that look attractive have already been traded. Just like the supernova. In fact, the leading U.S. study on latency arbitrage used microsecond timestamps but adjusted for the time would take to send orders to a quote that looks locked or crossed from a distance. That study found that those attractive quotes were in fact usually the afterglow of a now-executed trade, and not in fact an actionable quote. After accounting for this, the study found that latency arbitrage added to just $11.6 million per year in 2015.

Once 500 µs has passed, all the information about the fills and new quotes from all exchanges should have arrived back at Carteret, even if the fills are returned on fiber (180 µs outbound + 280 µs return =460 µs).

Given the UTP SIP takes less than 20 µs more to update the NBBO, within 500 µs (half a millisecond) the whole market will have traded, and the NBBO at the SIP will be updated. 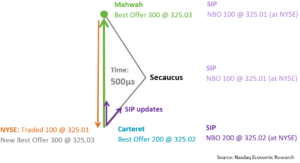 There are three important takeaways from this:

The SEC acknowledged as much years ago when they decided that anything faster that 1ms was “de minimis.” In short, the SIP works great for retail and any professionals watching a screen.

But given all the price discovery happens in less than 1ms, raises an interesting question.

How important is 1ms?

If you’re a computer, 1ms is material.

In fact, 180 µs is all the time a computer needs to buy all the shares on the offer across all New Jersey Markets (at least those without a speed bump).

Within 1ms, all price discovery has happened. We can show that by viewing the chain of events from above in a timeline (Chart 6):

In fact we discussed how different investors will be makers and takers of liquidity throughout the day.

But more importantly, data shows that these milliseconds of activity includes 100% of price discovery and an astonishing 28% of liquidity, despite representing less than 0.1% of the day for a typical stock.

That’s because there are 23.4 million milliseconds in each trading day. On a typical day there are only around 35 million trades across the more than 8,000 NMS stocks. Because the SIPs are so close to the speed of light, most stocks are in the “gray zone” above for less than two seconds of the trading day.

Turns out, when you’re a computer, trading is a lot like fishing. The majority of milliseconds are spent waiting with no new information. But when an investor bites, your fills will happen quickly, and the last thing you need is for the fish to get away.

For some stocks, more than half of all liquidity happens on a price change

Of course, all stocks trade differently. In fact diving into ticker-level detail in Chart 7 shows: 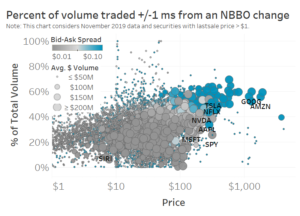 Why does this matter?

This is an issue that affects many of the modern market structure debates. Often, the debates are missing how the physics and the geography impact in our markets.

Our NBBO is the envy of the rest of the fragmented world. It reconsolidates the fragmented market, and protects investor’s quotes and fills, simplifying the market and execution quality measurement.

Despite that, proposals to eliminate geographic latency will create fragmented SIPs too. Quotes will be different at the exact moments people are trading. In the current market, a short sell might be Reg SHO compliant, or not, depending where you sit. NBBOs won’t be national any more. Trade-troughs and crossed markets will be inevitable, permitted by the rules.  Latency arbitrageurs will be lauded for “keeping markets in line”.  All because we can’t wait less than 1ms for all quotes to update, a cumulated wait time of 2 seconds each day.

That implies the market no longer agrees 1ms is de minimis.  On that basis, we should also unwind the complexities that interpretation permitted.

Pull at this thread all you like. The speed of light is the only thing that is truly the same for everyone.