For reasons that will forever escape, the Securities Traders Association of Chicago (STAC) chooses to hold its big, annual meeting in Chicago during the first part of January. Maybe its to get a good start to the New Year or maybe its because people need something to do in the middle of the winter. It certainly isnt because of the weather.

That being said, the conference had a number of compelling panel presentations and featured a rousing keynote from one of the most loved sports figures in town; Chicago Cubs Chairman, and CEO, Tom Ricketts.

Day One: Dodd Frank and the Tick Size Pilot

In addition to panels on equity derivatives, women in finance (see Tidbits below), and risk management technology, two standout panels of the day were on Dodd Frank and an assessment of the equity market Tick Size pilot results.

The Pending Dodd Frank Changes panel was instructive as a template for how many change initiatives are likely to unfold with the incoming administration. As Pat Hickey ofOptiverpointed out, the very title of the panel was misleading because nothing definitive is pending to change the Act. In addition to Hickey, the panel included Mark Longo of theOptions Insideras moderator, Paul Jiganti fromIMC, John Hague ofRSM, and Joe Corcoran fromOCC. While all of the panelists were generally negative on Dodd Frank and could name specific policies that had the most deleterious impacts on the market, no one was so bold as to predict that wholesale changes will be coming. Many pointed to Jeb Hensarlings CHOICE Act as a likely source of changes, while Jiganti posited out that its most likely that changes to Dodd Frank will be made to policies that dont even touch the derivatives and trading business. If that is the case, it will once again prove that despite big talk and good intentions, regulation is usually a one-way street: once its in place, theres no going back.

The most heavily attended session of the day was Execution Quality – Post Tick Size Pilotand for good reason. The press was excluded from the panel and to good effect: the gloves came off and the panelists gave a brutally frank assessment of how the pilot is doing in its first three months. Interestingly, the concurrence and divergence of opinion even in this small group of six panelists was emblematic of the current debate regarding market structure as a whole: there is agreement on the fact that there are market conditions that are problems, such as decreasing liquidity in many individual markets, but the proposed remedies are as different as noses (everyone has one and they all smell!). At the end of the day, no one is an enthusiastic supporter of the Tick Pilot and many, if not most, feel that it has done more harm than good. It remains to be seen if the new administration does anything about it, with the general consensus being that its more likely that the Tick Pilot will be extended beyond its intended two year run than it is that it will be ended early.

Day Two: Trading Under Trump and Innovation in Technology

Day One of STAC ends with an all-star band of industry musicians, the LaSalle Street Blues Band, playing until 1:00 in the morning. Consequently, day two starts a little slowly and builds from there.

The first panel of the day was on a theme that is sure to be a part of many conferences this year, Trading Under Trump. Moderated by Drew Mauck of3Points Communicationsand featuringDeanna Lahrefrom Starfutures Inc., Bob Iaccino fromPath Trading Partners, the Chicago TribunesMichael Lev, and Lanre Sarumi fromLevel Trading Field, the panel tried to distill some method from the madness. Some of the highlights included:

Fintech is ascendant and the final panel of the day was Innovation in Technology. The panel featured Feargal OSullivan from USAM Group as moderator, Brian Clark ofAscent Technologies, Tim Hogan fromCrowdSourceFunded, Thomson ReutersScott Manuel, Don Ross fromPDQ / Coda Markets, and Joe Wald ofClearpool. Each of these enterprises deserves a look but, for the sake of brevity, three themes continually came up: cloud, blockchain/distributed ledger, and AI. Heres what each panelist predicted we will be talking about in three years: 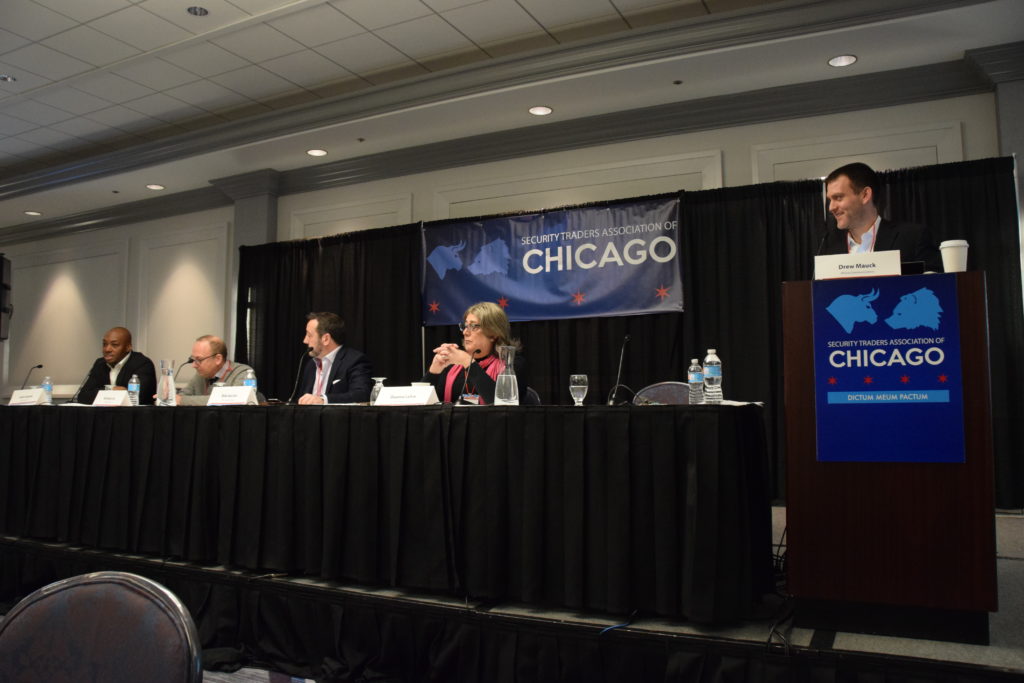 Lanre Sarumi of Level Trading Field speaking on the Trading Under Trump panel, with (from left to right) Michael Lev of the Chicago Tribune, Bob Iaccino from Path Trading Partners, Deanna Lahre of Starfutures and panel moderator Drew Mauck from 3Points Communications. 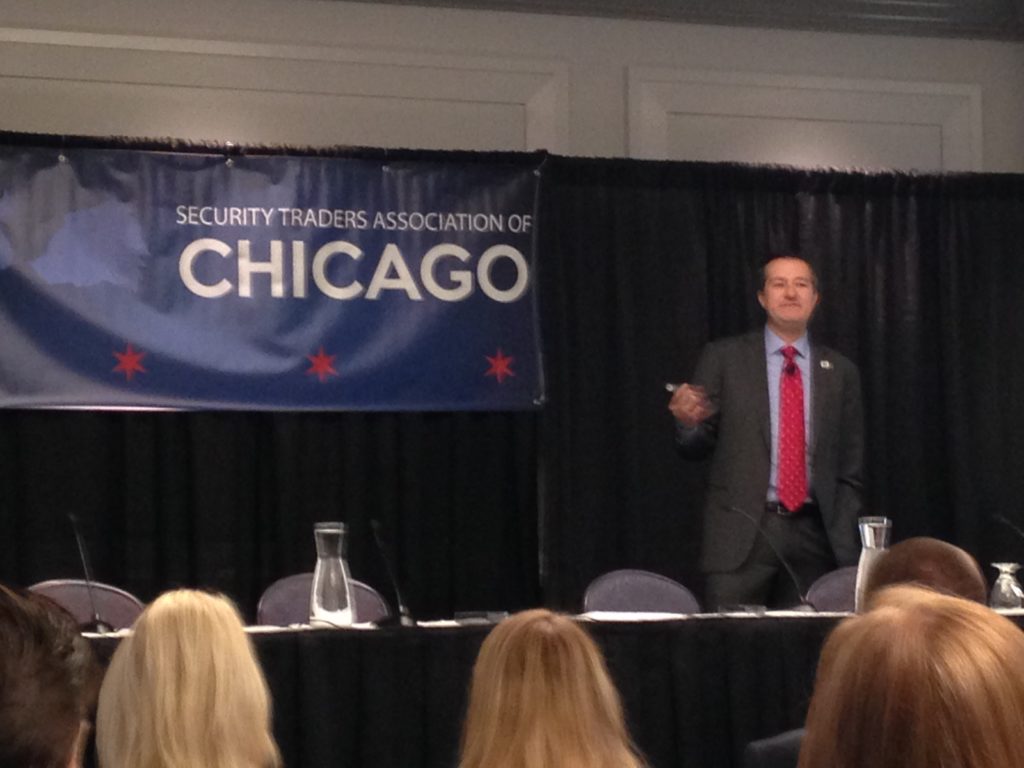 Chicago Cubs Chairman Tom Ricketts spells out how the Cubs built a team and won the World Series.

While the Tick Pilot panel attracted a big crowd on day one of the meeting, the appearance of Chicago Cubs Chairman Tom Ricketts had the room packed to capacity at the end of day two. Everybody loves a winner.

Ricketts gave an entertaining yet thorough account of how the Cubs made it to becoming World Series champions. The way they turned things around in 5 short years can be distilled down to several central tenets:

In the Q&A session, Ricketts was asked if there was one thing in the championship celebration that was the best for him. He told the story of riding on the top of a double decker bus in the victory parade and seeing a young girl sitting on top of what was probably her fathers shoulders holding a sign that read: We did it Grandpa. That, to him, encapsulated how much a Cubs World Series win meant to so many people.

Chuck Mackie leads Maven Waves business development efforts within financial markets. Mr. Mackie has over 30 years of experience in the financial services industry with a strong emphasis on electronic trading and development of new markets. Mackie joined Maven Wave in 2010 to focus on business development in strategic consulting, application development, and cloud applications for exchanges, proprietary trading firms, FCMs, and information companies. Prior to Maven Wave, Mr. Mackie was a principal in SaaS firm Fundamental Analytics for 2 years, Director of OTC Clearing at ICE for 6 years, and Head of Sales for the CME at trading software firm Trading Technologies. Other past employers include Paris Markets, the CME, and JPMorgan Chase.
Share
Tweet
Share