While everyone has been concerned about the sell off in the stock market in the past two weeks, this decline should be contrasted with the rapid rise in the price of government bonds.  For the first time in history, the yield on the 10-year government bond fell below 1%.

As Figure 1 illustrates, the 75-year interest rate pyramid is continuing its path toward new lows.  The pyramid began on November 30, 1945 when the 10-year bond yielded 1.55%.  The yield gradually rose for the next 36 years, peaking at 15.84% on September 30, 1981.  The yield has trended downward for the past 39 years, and now has sunk below 1%. The past 75 years have provided a near mirror image in bond yields.  So what does it mean? 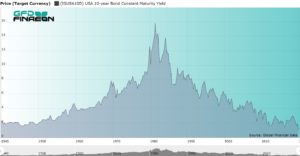 Before the current downturn, the lowest yield on the 10-year bond was 1.37% which occurred on July 5, 2016.  We analyzed the 75-year interest rate pyramid in the blog “Government Bond Yields and Returns in the 2020s” which was published on January 8.  We predicted the continued decline in government bond yields in the United States during the coming decade.  With negative interest rates on most 10-year bonds in Europe and Japan, there is no reason why yields in the United States shouldn’t continue to decline.

The 10-year bond yielded over 3% in November 2018 and by December 31, 2019, the yield on the 10-year bond had fallen to 1.92%.  Today, the yield is half that.  This decline has provided an 8% return to fixed-income investors during the past two months as the price of government bonds has risen. A 10-basis point decline in the yield rewards investors with a short-term gain of about 1%.

In the blog “300 Years of the Equity-risk Premium” published on February 5, we predicted that the total return to government bonds over the next 10 years will be around 2% per annum or less. This return can only occur through the continued decline in bond yields and increase in the price of government bonds. As we explained, government bonds have outperformed stocks since 2000; however, our analysis indicates that the return to bonds will be lower than the return to stocks over the coming decade.

The 5-year bond yield fell to almost 0.5% back in 2012.  So why can’t the 10-year bond yield decline to 0.5% in 2020? Figure 2 provides 230 years of bond yield data, which shows each decline building a deeper valley indicating that interest rates will soon reach a lower low. We believe it is only a matter of time before the yield on the U.S. 10-year bond hits 0.5%. 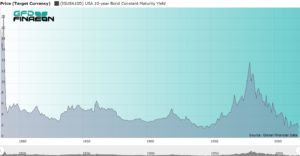 Simplifying the Workflow of Buy-Side Traders