It’s difficult in a market like this to watch your 401k account shrink. To stop the flood of bad news, some have even suggested the markets should close until after the coronavirus uncertainty is over.

But is that a good idea?

There are not many data points to support this, as it hasn’t happened very often. But markets have indeed closed intentionally for multiple days, even if just a handful of times.

When we look at the data, the closures rarely reduced volatility or even stopped markets falling. But risks seem aplenty.

Chart 1: Markets have rarely run away from volatility 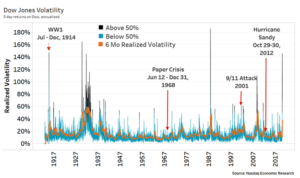 The data above shows that multi-day closures are rare (red arrows), despite many episodes of volatility spiking above 50% (black tipped bars). In fact, markets have historically stayed open through high levels of uncertainty, providing liquidity and price discovery. Please note that while the Paperwork Crisis lasted for six months, markets closed for one day per week during that time.

There are only four multi-day U.S. market closures over the last 100+ years. That’s despite the fact that there have been many more bear markets and volatility spikes (Chart 1).

Turns out most market closures were accompanied by operational issues, with important participants physically unable to get all aspects of the market infrastructure working.

Data also show that generally, the more operational the stoppage was, the smaller the impact on volatility.

However, the multi-day stoppages that were accompanied by significant uncertainty and volatility saw those markets re-open, on average, down an additional 6% (Chart 2) with volatility roughly doubled (Chart 3):

Markets were closed shortly after the declaration of war and a rapid 11% selloff. When they re-opened months later they immediately dropped a further 21% and volatility tripled.

Chart 2: Halting markets does not stop them falling 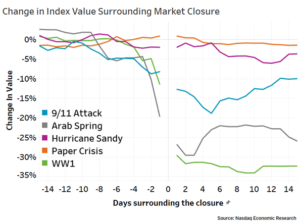 These intentional shutdowns didn’t affect volatility. In fact they happened during one of the lowest volatility decades in the past century (yellow in Chart 1). 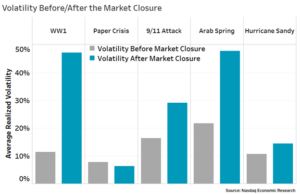 When the market re-opened, stocks fell another 10% and volatility spiked even higher, above 100%.

The market dropped 5% on reopen and sold off 12% at its lowest point shortly after September 11, which was less than many had feared just days before. But volatility more than doubled. One month after the attacks, the S&P500 was back at its level from September 10.

What are the unintended consequences?

Just because a market is falling doesn’t mean valuations are irrational. As we recently discussed, there is a strong likelihood that company earnings will be lower this year. If that’s true, valuations and stock prices should be lower too.

Efficient and transparent market prices are also useful to investors and regulators. As a contrast, consider the unusual price movements in bond markets last week, where bonds were selling off in lockstep with stocks, and bond ETFs were trading at discounts to less liquid corporate and muni bond indexes.

Price discovery also helps efficiently allocate assets, especially in times of stress. For example, current markets show the most significant loss of revenues are likely in the travel industry and energy stocks, while health care and technology are seeing increased demand (Chart 4). That helps the government focus their policies and understand changes in personal behaviors. 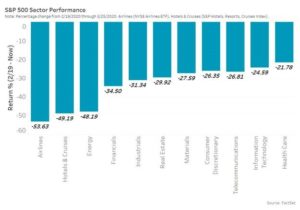 Perhaps most important of all, a closed market doesn’t mean investors’ portfolios are worth more. It just means their portfolio is illiquid and valuations are stale.

In fact, Chart 2 shows that investors who are forced to wait for liquidity usually reopen at even lower prices later. That’s bad for anyone that needs liquidity now, whether to pay for rent or school, or to buy even cheaper stocks or bonds.

Ironically, the person it doesn’t impact is most 401k investors, who have no intention of trading and can afford to wait this selloff out, whether the market is continuous or not.

Markets also exist for corporates to raise capital. Even in the current crisis, companies involved in COVID-19 research or hospital supplies may need extra capital. Getting it quickly will help fight the virus and get the economy back to normal. In addition, the public will benefit from live prices if the government decides to buy equity in a company needing a bailout.

The bigger unintended consequences come from failing to understand that efficient markets are interconnected. An ecosystem of participants that include hedge funds and market makers keep the interrelationships of assets around the world priced efficiently—U.S. stocks vs. European stocks, U.S. stocks vs. futures, even U.S. stocks vs. bonds and FX rates and each other.

Closing something as large and interconnected as the U.S. equity market would not only break those interrelationships, it would squeeze liquidity in unexpected ways and generate losses that could not be covered:

Because of this, the threat of closing the markets itself could be enough to trigger its own liquidity crisis.

Chart 5: If the U.S. equity market closed, it would shift selling pressure to smaller markets 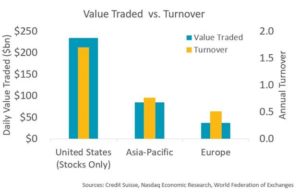 There is already enough uncertainty in the market. The worst thing we could do now is add more uncertainty by changing rules, breaking hedges and squeezing liquidity into less liquid markets.

In times like this, we need all participants trading and hedging with confidence in the future. That’s why markets have rarely stopped for a selloff.