As we recently discussed, the SEC has a number of significant rule change proposals on the slate right now.

One of those proposals involves splitting the old National Best Bid and Offer (NBBO) into two new kinds of BBO. That’s not as simple as it sounds, nor does it completely fix many problems.

What the BBO is going on?

Currently, when you are trading, the SIP shows you an NBBO. That’s the best of the best buyer and seller regardless of which exchange they’re waiting in, although it needs to be for at least a “round lot” (usually 100 shares). If you’re trying to capture spread, that round lot also ensures you have a “protected” quote, meaning you won’t miss fills if a large trade causes worse prices to trade at other venues (be “traded through”). It’s also the same prices that Rule 605 uses to monitor investors’ execution quality and protect them from bad fills.

However, the U.S. market has an “ odd lot problem.” That’s because 100 shares of AMZN (for example), at over $200,000 not only qualifies for block size but is multiples larger than the average trade or best bid value. So what tends to happen is that algos and individual investors bid for smaller values of AMZN, creating an “insiders” market at better prices than the NBBO shows.

One problem with this is that investors and brokers using the SIP won’t know that there are small buyers and sellers at slightly better prices in the market.

Chart 1: Currently an investor is protected at the NBBO but odd lots can exist at better prices 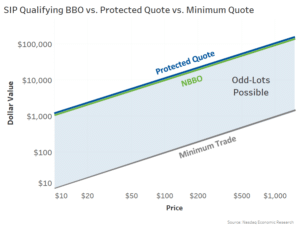 Dynamic round lots to fix…well not much really

In their Valentine’s Day NMS-II filing, the SEC proposed a solution to the odd lot problem that creates smaller round lots as stock prices rise (see Table 1).

Table 1: New round lot sizes to be used for SIP NBBO but not protected quotes

The proposal results in an NBBO that has a more consistent value (green line in Chart 2). Our data suggests this will also significantly tighten displayed quotes for higher-priced stocks. However, there are three consequences that traders might not like:

But that might not matter, because the new NBBO is also no longer protected, so sophisticated investors don’t need to trade with those quotes even if they are at better prices.

An odd solution to the odd lot problem

Instead, protected quotes will remain pretty much as before, defined as orders for 100 shares or more, creating a new “PBBO” (Protected Best Bid and Offer) that is much larger than the NBBO, especially for very high-priced stocks.

That leaves a complicated scenario where:

We show how this new rule set works for different stock prices in Chart 2 below. The yellow zone shows where trade throughs would now be allowed, while the blue zone shows where better prices will still be hidden from investors buying the SIP.

Chart 2: Under the new rules, the NBBO will be different to the protected quotes (PBBO) while odd lots may still rest at better prices inside the NBBO 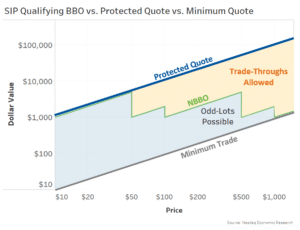 A more subtle problem with the NMS-II proposal is how to aggregate the odd lots from all the fragmented venues in the market. Currently for high priced stocks, quotes from all 13 venues typically form at random prices inside the NBBO (blue in Chart 3). Under the new NMS-II proposal, for AAPL, with a price between $100 and $500, 10 shares on one exchange would represent the NBBO, even if there was a combination of 8 + 6 + 9 = 25 shares at slightly better prices across three other venues. Moreover, if one exchange had multiple odd lots inside the NBBO, only their “best odd lot” would be collected under this proposal.

Chart 3: Example of how the NBBO and PBBO vs. intelligent tick and odd lots could work 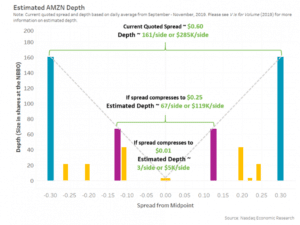 An even better solution to the odd lot problem

In other developed markets, the solution to the odd lot problem has been to eliminate the distinction between round lots and odd lots.

Allowing trades in any whole number of shares in turn makes all quotes equal. It also ensures that the true best bid and offer is displayed for all to see.

The downside, as we’ve noted before, is that nobody wants to be benchmarked against one-share quotes.

Throughout most of the world, markets have adjusted for that by modifying spreads so that they represent consistent returns for liquidity provision. Using Chart 3 again, what that does is force all the yellow bids and offers into the purple queues.

We recently proposed a similar solution for the U.S., using intelligent ticks combined with the elimination of round lots. Based on our analysis, if spreads are set right, the data suggest the notional depth of stocks will also be consistent across stock price.

Data also shows that if you widen the increments, depth at each tick should increase, allowing us to control the value at the NBBO. Our estimates show that what tends to happen is $30,000 worth of shares accumulates at the NBBO, regardless of how many shares that takes.

There are a lot of odd and conflicting aspects of NMS-II. But it would be sad to make wholesale changes that don’t even fix the problems.

Table 2: Changing NMS is complex; it’s easy to do more harm than good 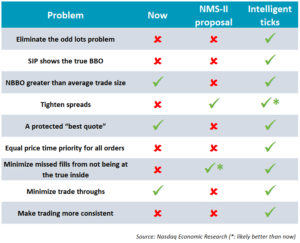 Two things we should all agree on is that U.S. markets are the best in the world and we all benefit if we can keep them that way.

Without a data-driven-solution it is easy to do more harm than good.