As investors around the globe look for exposure to safe-haven assets, Bitcoin seems to be proving an attractive choice for institutional investors. May saw volumes on regulated platform CME soar, recovering substantially from a lull in April.

Options are one area seeing particularly impressive growth. CME total options volumes reached an all-time monthly high of 5986 contracts traded in May. This figure represents 16 times that of April’s volumes, and dwarfs those of previous months, since Bitcoin options launched on the platform in January.

CME Bitcoin futures have also recovered well since dipping in April, increasing 36% to reach 166,000 contracts traded in May.

More broadly, May saw volumes for CME Bitcoin derivatives soar 59% to hit $7.2bn, a monthly increase greater than any other derivatives exchange (both regulated and non-regulated) – adding weight to the thesis that institutional investors are entering the market in a substantial way.

May also represented an all-time high in daily options volume, with CME trading 1418 Bitcoin options contracts on the 28th of May. 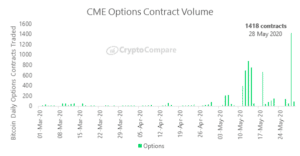 Crypto Derivatives Volumes Hit an All-time High in May 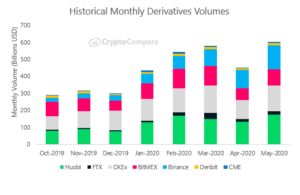 What’s more, crypto derivatives are gaining market share of the sector as a whole. Total spot volumes increased only 5% to $1.27 tn in May, which meant that derivatives represented 32% of the market, compared with 27% in April.

Crypto derivatives exchange Deribit has seen another daily record, trading $196 mn in options on the 10th of May, the highest amount ever seen on the growing platform.

In May Deribit’s monthly options volume also reached another all-time high, trading $3.06bn (up 109%) to double the volume seen in April ($1.47bn).

Spot volumes in May were also high, growing slightly from April. The 10th of May saw enormous volumes, just one day before Bitcoin’s halving event, which took place on the evening of the 11th. 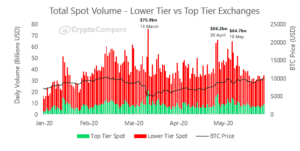 Categorizing exchanges by tier level based on our rigorous Exchange Benchmark methodology helps us capture a more representative picture of where the market has moved. The majority of this figure is represented by Lower Tier exchanges ($49.88bn) while Top Tier exchanges traded $14.86bn.

Furthermore, these volume spikes have continued into June, and since our analysis in the May Exchange Review, there have been some notable movements. Markets saw a sizable flash crash in the price of Bitcoin on June 2nd, where Bitcoin plunged over 7% in less than 8 minutes, sending other large-cap cryptoassets tumbling in tandem.

The chart below shows the anatomy of such a swing across several of the top exchanges, with volumes at each timestamp shown as a circle. 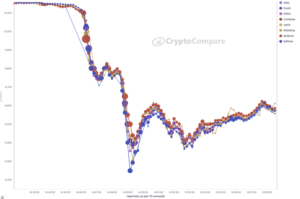