Every year in June, markets focus on the Russell rebalance for a scorecard on the current state of the US equity markets and “Russell Recon” always has an interesting story to tell. This year is no exception, with market watchers predicting record volume for Friday, June 26—rebalance day—due to significant market shifts in recent months.

Changes to the Russell US Indexes this year tell a very interesting story about the US equity market during a unique time in our history.

The big got bigger and the small got smaller 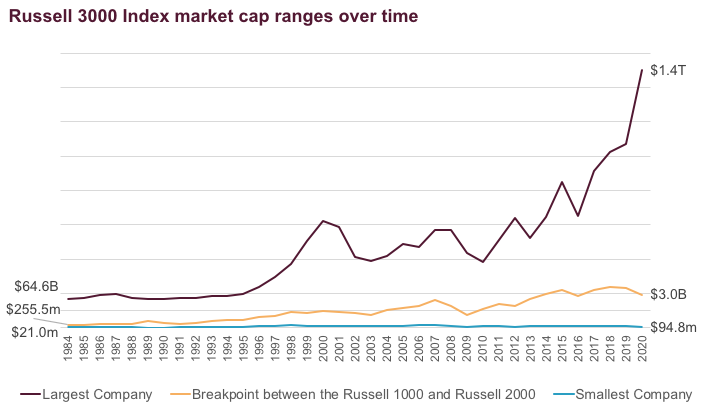 The decline in the breakpoint itself is neither surprising nor unusual, as the breakpoint declined in 2019 and was in fact below $3 billion in 2016. What perhaps may reflect the divergence of the markets is that the smallest company in the Russell 2000 Index is below $100 million, which has not been the case since 2009. Given the volatility in the markets since the 2019 reconstitution, however, this may not be surprising, and reinforces why it is important to conduct a regular rebalance of equity benchmarks, to capture changes in the market since the previous year’s reconstitution.

The largest five companies in the Russell 3000 Index, on the other hand, remained the same as at 2019 reconstitution, and the total company market cap of each of the companies has in fact increased in the last year. At $1.4 trillion in total company market cap, Microsoft is again the largest company in the index, followed by Apple, which is now the second largest company in the index after trading spots with Amazon.com.

In terms of Style shifts, Health Care companies such as Cardinal Health, Amgen, and Regeneron Pharmaceuticals are Russell 1000 companies shifting to 100% Growth. However, at 100% Growth, new entrant Zoom Video Communications is the largest addition to the Russell 1000 Growth Index by size and weight.

This year’s Russell Reconstitution concludes at the close of US equity markets on June 26, 2020. The Russell US size index memberships will be reset, as will the Growth and Value Style indexes along with the Defensive and Dynamic Stability indexes. All eyes will be on the Russell US Indexes once again and we are looking forward to an orderly process and, perhaps, an all-time record for market volume